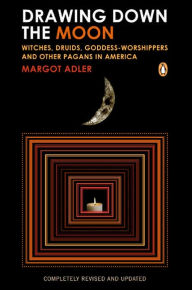 Margot Adler was a journalist who set out to investigate Pagans and Wiccans in the 1970’s. While Adler does deserve credit for DDtM being the first survey of Pagan religion in the United States and parts of Britain, all 400 hundred pages of her work can be (and should be) condensed into an elevator speech about the history of Wicca in America. Her writing drags, her psychotherapy background is displayed in haughty grandeur, and what claims to be a survey of Pagan religion in America is nothing more than blowing the egos of the Wiccan and Wiccanate religions while dismissing large swaths of the Pagan community.

In short, I am conflicted.

DDtM is a misleading book. The subtitle “Witches, Druids, Goddess-Worshippers, and Other Pagans in America Today” implies that there will be some relatively equal coverage. Not so. Of the 460 pages of sludgy writing 203 are devoted to Wicca (including a fantastically rage inducing interview), 132 cover all of the other religions she deems worthy of her interest, 22 are dedicated to explaining the Pagan world view (with a highly Wiccan flavor), and the remaining 103 pages talk about Pagans today (if you count “today” and the 1980’s which is when the last revision occurred in that section, example: her sources describe computers as a fad). A lot of really cool groups got left out the Minoan Brother- and Sisterhoods got the barest of mentions, Asatru got a few pages, the Cult of Rhea and Hellenion none at all. Neither did the OTO, the Gnostic Church, or any of the Kemetic Orders. These are all groups that a) don’t subscribe or really support Adlers assertions that the gods are merely archetypes in the human mind or b) don’t subscribe to the romanticized versions of magick and Paganism that she does.

It’s that condescending bias that roils through the book that makes it so infuriating. She refuses to acknowledge that other Pagans practice differently, that other Pagans are theists, whether they be poly- or pan-. She refuses to acknowledge that maybe, just maybe, magick isn’t limited to how she practices. But then that would mean being exposed to new and radical ideas. One of the book club members knew Adler when he lived in New York, and described her as one of the old women one sees at a church—the kind that always criticizes when something new is being done. And her writing does very little to dispel that image. She’s flat out hard to read, and not to brag about my reading prowess, but I’ve read some difficult authors in my time. She doesn’t take the cake but she is on my top ten list of authors I really don’t want to read again.

But for all that, she does have moments of brilliance. She asks some very thought provoking questions on gender and spirituality, and some on initiations and traditions. But overall, I suspect that she will go the way of Margaret Murray. DDtM will be used in favor of better books like Triumph of the Moon by Professor Ronald Hutton, or Her Hidden Children by Professor Chas Clifton (who is also the senior editor of The Pomegranate, the Pagan Studies academic journal); and be considered authoritative until it really isn’t, and the shining moments will be forgotten in the melee of how wrong it is.

This is by no means the last of my gripes with Adler, and perhaps her second Pagan based book Heretics Heart (which is a horrible title, it sounds like a Harlequin paperback) is better. Maybe I’ll read it, or maybe I’ll wait for the SparkNotes.

Daughter of Hecate, dog lover, would be author, Pagan in South Korea